This is the final edition of a three-part collaboration with Jodie’s Touch of Style and Sheela Writes. The idea was to showcase various ways of dressing in black and white. Also, though unintentional, it is a collaboration amongst mothers and daughters ❤️

The finale displays the color combination with a print, concluding the B&W Project.

Shades from Poshmark. Dress from a retail store in Malaysia.

Necklace from Poshmark. Blazer from H&M.

Here is the last set of the B&W Collaboration looks: 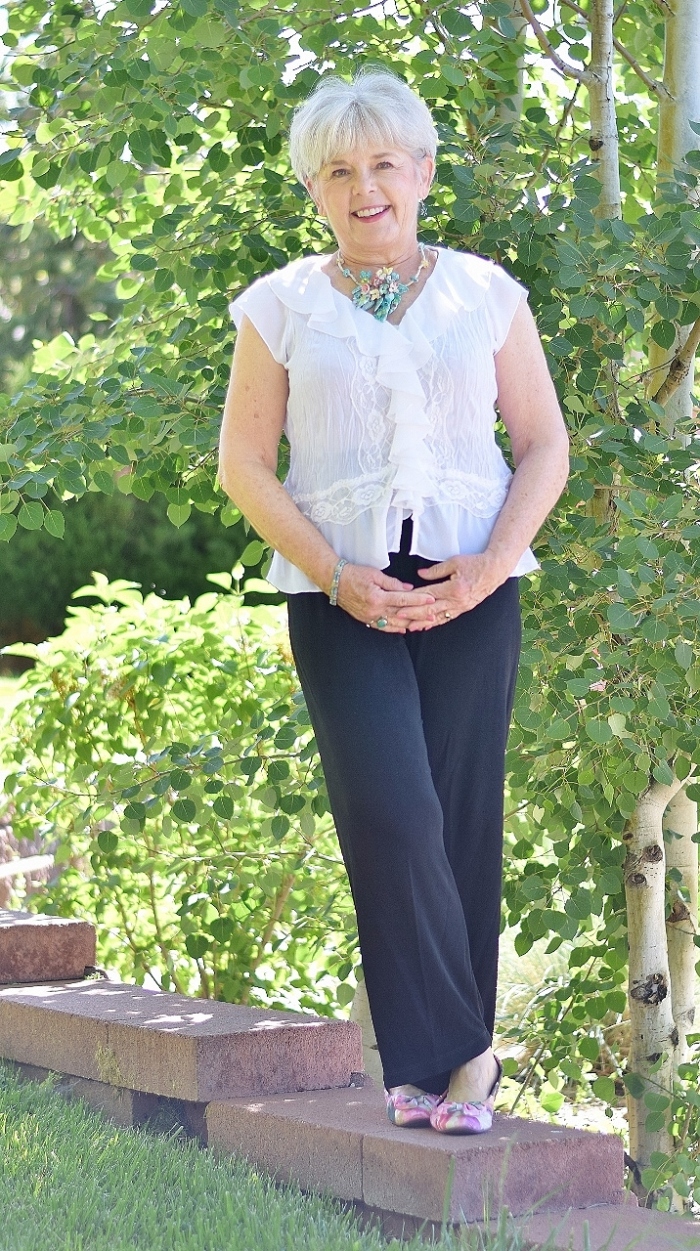 Such a sweet look from Charlotte. Adore those flowers, too!

Obsessed!!!!! My momma looks so good!

Throughout the majority of my life you’ve only worn black. It was only until recently that you’ve started experimenting with other aspects of fashion, e.g., prints, color, cuts. What motivated you to begin going outside of your comfort zone and how hard has it been to try new things?

I felt a little bored with wearing just black, and that’s the Gospel truth. I felt the need to add a few touches of rainbow to my life and, in the beginning, it was so incredibly difficult. I couldn’t think outside of black and white, and stripes aside, patterns didn’t even exist in my world, let alone have a place in my wardrobe. But with each different outfit, it got easier. Playing the color and print game became fun. And you know what’s ironic? I now find it equally challenging to put together something all black. Isn’t that ridiculous?

You’re known for your unique and unapologetic style. How has it impacted your blogging opportunities? Does it ever feel intimidating to be such an anomaly, or is it empowering?

A bit of both, I suppose. In the beginning, it was pure frustration, I confess. I struggled with myself, with wanting to stay true to me while wanting what mainstream bloggers had. After a while, I stopped caring about being an anomaly, I made up my mind that I was ok with being different. And things started falling into place. I know it’s cliched but it’s very true. Once you start accepting yourself, the world follows suit. These days, brands rich out to me for that very reason. They know they can rely on me to present their products in a manner that’s not predictable, and that’s exhilarating.

Who are your style icons and how do they influence your fashion choices?

Gwen Stefani. Hands down. There’s a reason why I own so many pairs from her GX Shoe line, and clothes from her L.A.M.B. brand GRIN she is, to me, the epitome of a kickass working mother who switches easily from edgy rock n roll star to chic professional, and so much more. Another person I admire greatly for her deft hand in mixing couture with high street and vintage is Jane Aldridge from Sea Of Shoes. What a maestro.

Black and white is one of the most known, timeless color combinations in fashion history. Why do you think it’s so popular?

It’s just as you said. Black and White together is timeless. It can create so many different moods, from graphic to classic and everything in between.

Use three adjectives to describe your style.

I think you described it quite perfectly – unapologetic. Unexpected. And, I’d like to think, whimsical.

You grew up wearing pink frou frou dresses and now here you are, all about the statement tees and black outfits. How do you think that change happened?

I started experimenting with graphic tees and dark colors after watching the movie Bandslam. One of the main characters, Sa5m (the 5 is silent), was a snarky teenager that always wore black and listened to heavy metal and reggae music. I was 10 when I saw the film and I thought she was the coolest thing on the planet. Up until that point, I had never met nor seen anyone like her and I wanted to replicate her outfits. But by the time I started 8th grade, I began to take inspiration from Sa5m rather than become exactly like her.

Do you personally wear so much black as an act of rebellion?

While I do try to experiment with different colors, black will always be my bestie. I wouldn’t say that it is an act of rebellion, but rather just something that I’m more comfortable with.

Why, in your opinion, is black the go-to colour for women across all generations?

Black is popular because it compliments every type of skin color and body type. Plus, it’s an incredibly versatile color.

Use 3 adjectives to describe your opinion of a B&W outfit.

Who are your style icons and why?

Zendaya is definitely one of my style icons. She’s incredibly versatile, ranging from jogger pants with kickass sneakers to gorgeous dresses to die for. She comes up with the coolest ideas and struts her stuff unapologetically. Selena Gomez is awesome too. I love her chic casual looks and often try to replicate them.

Thank you to everyone who participated in this collaboration!