I’ve just returned from my trip to Yale for the Ambassador Leaders program.

And I must say, it was pretty awesome.

Right off the bat I made some pretty cool friends.

We were a huge group representing places from around the globe. From China, Nigeria, Latvia, the United Kingdom, and many many more.

Also, Yale itself is gorgeous.

Every building looks like a cathedral. Even the gymnasium!

We were lucky enough to get to tour the campus. From the libraries (yes, plural), to the residential colleges, and to the dining halls. One of the residential schools – which looks like a town you’d see in a live action Disney film – had a bell tower! A BELL TOWER! And apparently it sometimes plays pop songs out of the blue. I guess Yale University is an Ivy League school for a reason. Plus the food there is amazing.

It’s been a packed week.

We’ve had a ropes course wherein I was left hanging midair for a few moments (and I was slightly spinning), and I’m ashamed (not really) to say that I got pretty competitive into the activities.

And when I get competitive, I get crazy.

Like “Everyone-Do-What-I-Say-Or-I’ll-Bitchslap-You-All-The-Way-Back-To-Your-Ancestors” crazy. Yeah, not my best moment. But once I cooled down by running through the sprinklers, I was a little bit more bearable.

Then we got to hang out with three representatives of United Way and spent over an hour putting together literacy kits (which was quite addictive). We were given four children’s books to choose from to decorate our kits around. I was torn between Bunny Money (because the name is adorable) and Brown Bear, Brown Bear, What Do You See? Ultimately my friends and I chose the bear because it had tons of animals in different colors, which was great to model after for our kits.

We also got to meet two awesome people. Sunjay Nath, a hilarious motivational speaker that looks like a cross between Steve Carell and the guy Ross from F. R. I. E. N. D. S., and Melora , a loud and lovable teacher of the 7 Highly Effective Habits of Teens by Sean Covey.

Dress from an indie Korean brand.

The day after we spoke with some Yale alumni, we attended an hour-long session with the Yale Undergraduate Admissions Counselor.

It started off pretty awesome.

We had just finished our tour of the campus and she began describing student life at Yale. Upperclassmen excitedly bombard freshman the second they arrive to question them on which residential college they’ve been sorted into (kind of like Harry Potter and the various Houses) and take their luggage into the dorms for them. They also have these “Tea Parties” wherein students invite public figures to speak with them on, well, anything. And the counselor told us that all financial needs are always met. No matter what your family’s home situation or yearly income may be aid is apparently always given once you’ve been accepted.

So by now we’re all feeling as though we could take on the world, until a parent asks what the acceptance rate is.

As you can guess, our high ride ended pretty quickly.

Earrings are Chanel. Shades from Poshmark.

On Thursday we traveled to the Big Apple.

Our tour guide showed us Wallstreet, the progress of the World Trade Center transit hub (a Phoenix rising from its ashes), had lunch in Central Park and saw the John Lennon Memorial, visited Rockefeller Center, and, of course, took pictures in Times Square.

Our guide, a true New Yorker, made tons of movie references and threw tons of shade towards the Kardashians and Trump.

We also saw a couple of street performers and had a delicious strawberry Popsicle.

We ran into a man who made these huge bubbles that almost seemed as though they were about to attack us. I think that was probably the best part of our trip to New York.

I mean, who doesn’t love bubbles? Especially gigantic ones.

On our way back to New Haven, the staff told us to watch the film He Named Me Malala and that we would have to answer some questions later on. In short, I saw the beginning and woke up just in time to see the ending.

I promise to give my utmost attention when I’m much more awake. 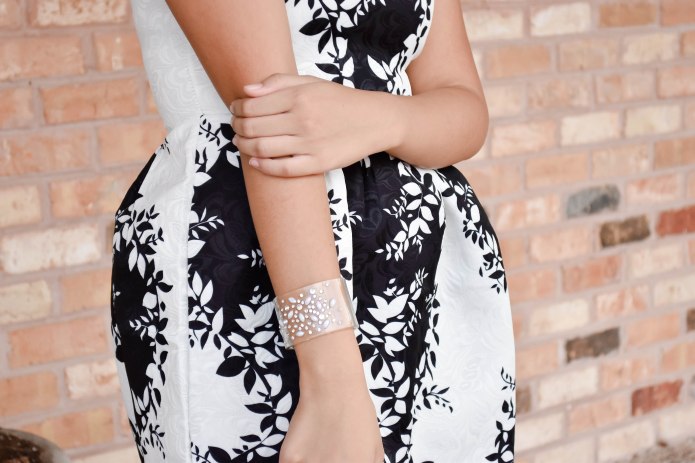 Cuff from H&M via Poshmark.

On the last day each group presented their community action plans, which we’ve been working on since Day 1, to the rest of the group and three Lead 2 Feed representatives.

My group was the last one.

Now, here’s some background information you need to know:

1. I caught a cold midway through the program.

2. Students were asked by the Primary Leaders to put together something to honor the Teacher Leaders.

As I waited for my turn to speak, I noticed that a few students were either sleeping or playing on their phones. Safe to say that I was pretty annoyed. Especially since I gave my undivided attention to them when it was their turn. So, in true Eve-Has-Lost-Her-Shit Fashion, before saying my piece I sarcastically thanked those for giving my group their time.

Since I had a cold, I was very nasal. So I wasn’t sure whether or not anyone even understood what I said.

I then apologized for sounding like an idiot because of my said-cold, which, apparently, people found quite amusing. Especially after I rolled my shoulders and pulled my hair back sassily (which was not intentional mind you).

After all presentations were given, we had about two hours of free time .

I immediately asked to go to the Yale Bookstore.

I wanted to buy some form of Yale merchandise. Some form of proof that I had visited the Ivy League school, because, you know, my momma did pay a lot of money for the trip.

My friend and I finished early and headed back to our dorms.

We were both so exhausted that we slept through our alarms and missed dinner. Naturally the staff freaked out and thought we were dead. Apparently people had been calling us but we slept through that too. When I awoke from my nap I saw that it was about 5:45. Then I had a mini “Oh crap!” moment when I remembered that dinner was at 5. I grabbed my things and headed out of my dorm when I ran into the nurse, who was sent to find my friend and I. Kailee, my Sleeping Sista, and I were later brought to the Trumbell Dining Hall for dinner.

I was torn between being incredibly embarrassed and laughing uncontrollably.

I have never in my life been late to something because I had fallen asleep. But hey, at least I did it on the last day so it’s not I could get into trouble or anything.

Afterwards we had our last Ambassador Leaders meeting and groups were given the time to thank their Teacher Leaders.

My group’s leader Ruben, a hilarious and energetic short Mexican (as he calls himself), was thanked last because we were Group #7. Because we were all so preoccupied with our Lead 2 Feed project, we hadn’t really prepared anything. But then again, most of the other groups hadn’t either. However, that morning I put together a 27 second video about why Ruben is awesome.

He encourages you to eat ice cream.

He gladly takes your mustard packs.

He laughs at you when you fall.

And also when you’re scared of dying (a. k. a. me at the ropes course).

But most of all he will love you unconditionally.

Or at least is nice enough to pretend.

After he saw the video, Ruben thanked not only us, but the entire Ambassador Leaders group, for “…letting him be an audience member of your (our) show…”

Kailee and I then asked him why he didn’t cry like the other Team Leaders.

He said he didn’t have to.

He said, “Beacuse you’ve made me strong.”

Everyone then headed back to Yale and celebrated all of our hard work.

We ate ice cream in the basement and went around crying and hugging everyone, reflecting on the past week’s events. And even though we were all sad that the program was coming to an end, we were also just happy to be around each other.

So one of the girls from Brooklyn whipped out her Beats Pill speaker, set up a playlist of throwback jams, and we all danced the night away.

Happy to be with each other.

By theworldaccordingtoeve
On August 1, 2016
5 Comments

These past months have been the first time that I’ve not only lived in an apartment, but also on my own. I never thought that it would be so hard […]
On My Own
%d bloggers like this: